On the Bridge (Sur le Pont) – Samuel and Frédéric Guillaume 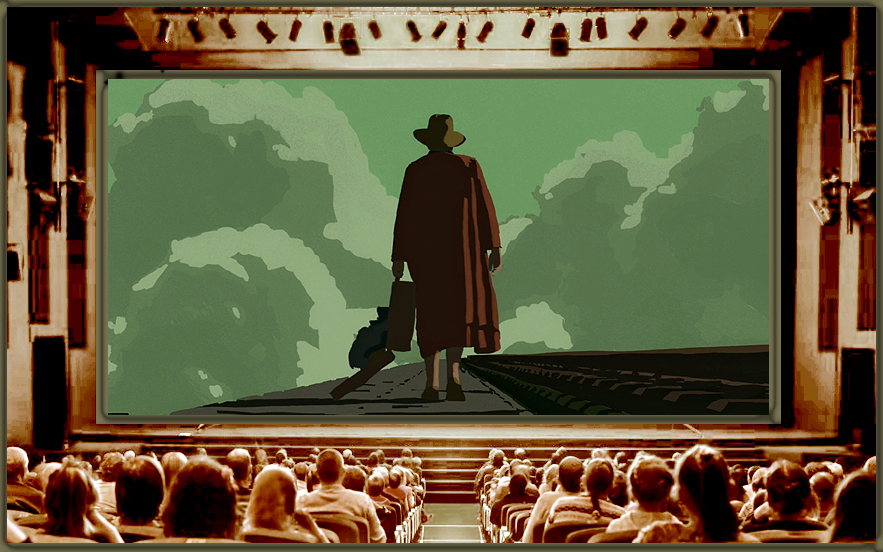 Samuel Guillaume and Frédéric Guillaume (Switzerland), On the Bridge, (Sur le Pont) Documentary, Animation – The incredibly talented Guillaume brothers deliver an exceptionally unique, vividly creative, technically beautiful and emotionally poignant film. Women and men board a mysterious train that takes them onto a bridge suspended between the land and the sky. Each in their own way experiences this threshold of walking on the edge of a dream, as though on a rite of passage heading to a certain end. Carried by actual stories and voices spoken by people at the end of their lives, the filmmakers remarkably weave together a coherent and incredibly impactful tale using these interviews within a larger story they created – bringing them all together. It is both brilliantly interactive between the characters and supportive of a central poignant theme. Beautiful animation and exceptional sound design. Combining documentary, fiction, lush painting-like animation and the tenderness of life and love. It is a moving and truly lyrical piece of filmmaking ingenuity.

Shea E. Butler (USA), The Trial of Ben Barry, African American, Film Short. Iconic Golden Globe-nominee Richard Roundtree (SHAFT) and SAG Award-nominee Lawrence Gilliard, Jr. (One Night in Miami) deliver powerful performances as estranged father and son reuniting after twenty years – each of them helping the other to face the mistakes of their pasts. Impactful scripting, direction and compelling performances.

Hossein Darabi (Iran), Henas, Film Feature, Islamic – Depicts the story of Shohreh Pirani, the wife of Iranian scientist Daryoush Rezaeinejad who was assassinated while with his wife and child. Seen through the perspective of Shohreh, with an exceptional performance from Merila Zare’ei (Track, About Elly) leading a talented cast including Behrouz Shoeibi, Siavash Tahmoures, Solmaz Ghani, Vahid Rahbani. Well crafted and well paced.

Keunhyun Cho (Korea / USA), Killing Diva, Asian – Wan-Sun Kim is a legendary dancing diva who shot to fame as the K-Pop “Madonna”. But now, 30 years later – she is forced to face her inner demons – and confront her “Pierrot” the character who represents her inner clown. Lush cinematography from Park Jaein and authentic portrayals. Stars: Wansun Kim, Lee Kyung-young, Choi Baeyoung.

Zsolt Pozsgai (Hungary), Darking Way, Film Feature, Ensemble Cast / Feature – A passionate portrayal of condemned prisoner General Ignác Török – one of the leaders of the Hungarian War of Independence. Through his reuniting with his soul-mate and surprise family member the night before his death mysteries, past and current traumas unfold. Excellent performances from Viktória Békefi, Katalin Pap, Máté Szabó.

Daniele De Muro (Italy), Horizon, Film Short – A dystopian future brought about by climate refugees looking for safety in a bleak reality where the law of the strongest rules the world. Amidst this chilling reality the characters find salvation in acts of compassion, selflessness, love and humanity. Beautiful cinematography and authentic performances. Stars: Carlo Porru, Chiara Lai, Viola Scuderi.

Tim Cofield (USA), Holler from The Holler, Music Video – Driven by the intense music of Stephen Wilson Jr. the film follows a ‘traumatized but strong’ thirteen-year-old boy as he is forced to confront his abusive father as he is pushed past his emotional limits. A disturbingly powerful treatise on poverty, abuse, lost childhood and violence. Stars: John McDonald, Denise Johnson, Tim Doyle.

Max Clendaniel (United Kingdom), Kiss It, Music Video – An arts and crafts show for day-time television goes terribly wrong. Follows childrens’ TV host, played by Alan Medcroft (The Butterfly Tattoo) as he tries to control his frisky, “adult fun-loving” puppets as they decide to put on a show of their own. Clever and well crafted. To the music of Ready Steady Die.