WE THE VOTERS
Vulcan Productions / Show of Force / Warrior Poets 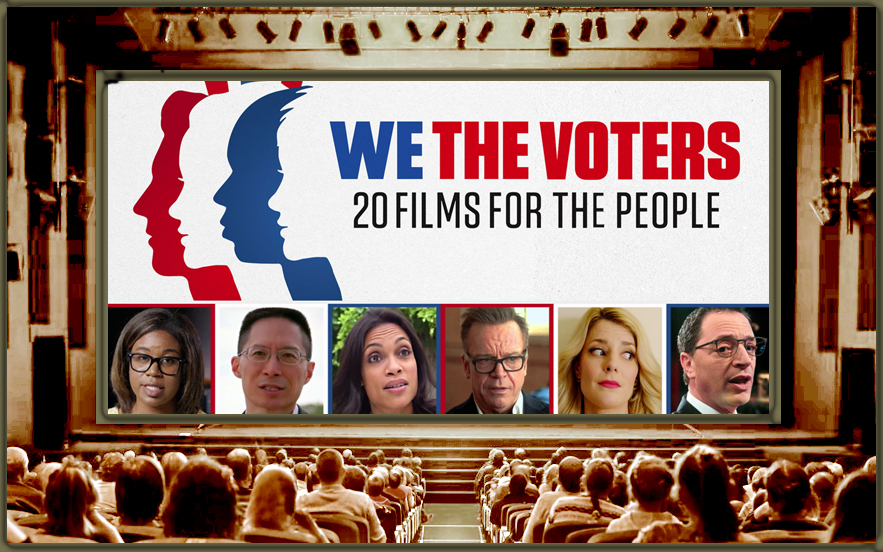 Contemporary Issues / Use of film for social change (USA) – We the Voters is a nonpartisan digital slate of 20 short films designed to inform, inspire and activate voters nationwide with fresh perspectives on the subjects of democracy, elections and governance in the lead up to the 2016 elections.  The star-studded digital initiative features comedies, documentaries and animated shorts that show how U.S. democracy works and encourage Americans to make informed choices and show up to vote. Each unique film covers an important topic in a fresh, informative and highly entertaining way.  Features stars such as Rosario Dawson, Joshua Malina, Tom Arnold, Richard Kind, Analeigh Tipton, Grace Helbig, Josh Horowitz and more. Highly creative filmmaking, inspired writing, excellent performances and fresh perspectives define this exceptional set of films.

Patrick Osborne (USA) Pearl, Animation – Living in their car, a girl and her dad cross the country chasing their musical dreams. It’s about gifts, their power of love and finding grace in unlikely places.  Driven by and indelible and touching song, Oscar-winner Osborne brings extraordinary filmmaking to this charming film – part of the Google Spotlight series.

Brian A. Ross (USA), The Letter, Film Short – A New Yorker at the end of his rope finds the writing of his suicide letter punctuated by a chance meeting with a mysterious woman (and a sweater-wearing dog) who may ultimately save his life. An enticingly quirky and touching film with charming actors and creative editing.

David Bertran (USA), Coming to Terms, Film Short – Facing the passing of their parents, Eddie and Sally try to understand death based on their pious dad’s religious teachings. When life in Heaven seems ideal, they make a decision that nobody could have expected.  A poignant and impactful story leaving the viewer to contemplate their own beliefs.

Qiu Hao-zhou (Taiwan), The Black Box, Film Feature – A famous journalist is kidnapped and imprisoned in a warehouse. In order to survive, she has to play a real escape game with the help of a hostile colleague.  The game takes unexpected turns as mysteries unravel and lives are forever changed. Engaging and unexpected with talented cinematography and editing.

April Phillips (New Zealand), REM, Film Short – When security guard Gail Morris comes across a homeless man with an extraordinary gift, she desperately dreams of harnessing it to save lives, but first she must save him and not all dreams are free.  A compelling story with outstanding acting and direction.

Bill Wisneski (USA), Joshua Tree: Threatened Wonderland, Doc Short – With mysterious rock formations and iconic trees, Joshua Tree provides a haven for those seeking inspiration. Scientists predict that most of the trees will disappear within 80 years due to pollution, fire and global warming. Stunning cinematography, skillful editing and impactful narrative.

Michael Raso (Australia), Solitude, Film Short – Widow Margaret spends each day sitting on a bench at her local train station. The staff are aware of her presence and give her something significant in an envelope, hoping she’ll not return. A sad and sweet story of love, loss and cherished memories impactful in its unassuming-ness.

Susie Singer Carter (USA), My Mom and The Girl, Actress: Leading – Five-time Emmy winner Valerie Harper plays Nanny, a former singer suffering from Alzheimer’s whose fearlessness takes her on an enlightening adventure in East L.A.  With a funny, poignant and genuine portrayal, her performance is both heart-breaking and heart-warming.