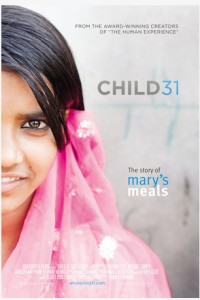 Each year, the Indie Fest honors a filmmaker with its Annual Humanitarian Award for a production dedicated to social justice, humanitarian causes or environmental issues.

Produced and Scripted by Michael Campo with Joseph Campo as Executive Producer and Clifford Azize sharing producing credits, Child 31is one of today’s must-see films.

Child 31Puts a Face on World Hunger – by Alex A. Kecskes 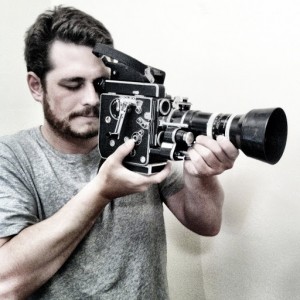 In this interview, director Charles Kinnane shares the passion and dedication he and his team brought to this important film.

Q. Why do you think you were selected to receive the Indie Fest’sHumanitarian award?

A. The mission of Mary’s Meals is so compelling on its own. It was a privilege for us to tell the story. I can only imagine the team at Indie Fest were as inspired watching the mission and story of Mary’s Meals as we were capturing it.

Q. How has receiving this award helped you?

A. I am really hoping it will help us bring more attention to the organization, which I know will result in more children being fed in schools. 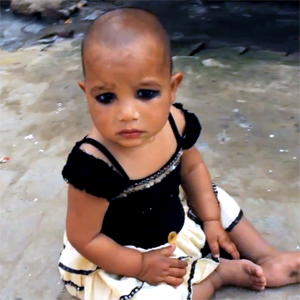 Q. Where did the idea for the film originate?

A. The founder Magnus MacFarlane Barrow had seen our feature length documentary, The Human Experience and thought we would be a perfect fit to tell the story of Mary’s Meals. By chance, we ran into their United States director, Patricia Decker on another film shoot. She put the whole connection together with our Producer Joseph Campo and we were soon headed to Scotland, Malawi, Kenya and India.

Q. Was this your first film about hungry or neglected children? If so, how was it different than your other films?

A. There are many great charities we have had the privilege to film, but the idea of pulling hungry children into school with a meal is revolutionary. It’s one of the simplest and most profound solutions to solving world hunger we had ever encountered

Q. Why is this subject important to you? 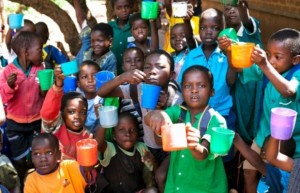 A. It’s about feeding starving children, giving them an education and a ladder out of poverty. What could be more important?

Q. How closely did you work with the Mary’s Meals?

A. We worked very closely with Magnus and communications director Kim Webster to make certain the film captured the true essence of the organization. We traveled with Magnus the entire time. We had a great crew on the ground, headed by our producer, Clifford Azize and his brother Jeffrey shooting alongside myself. The fact that we lived and traveled with the founder to four countries over the course of a month was very helpful. Our art director, Jeffrey Ptaszinski, worked hard to come up the look and design of the film that would be stunning but would complement the aesthetic of the organization.

Q. Any updates on 12-year old Lette? Or the 11-year old street kid in Kibera? 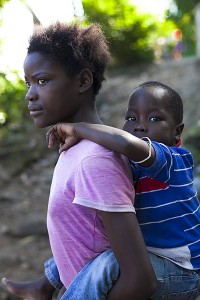 A. Lette is doing well in school, and she and her family are still benefiting from receiving Mary’s Meals every day. The school near the orphanage where Muski was placed started receiving Mary’s Meals shortly after he arrived. After three years of being homeless, a close relative discovered he was in the orphanage and has adopted him into their home.

Q. What’s the yellow oatmeal-like food most of the kids are eating in the film?

A. Lakuni Pala is a porridge made from corn that is infused with vitamins and minerals that the local kids love to eat, and it keeps them full and healthy.

Q. Who funded the film?

A. Private donors made sure that the film was funded independently. Our executive producer Joseph Campo was able raise one-third of the budget on his own. That’s how passionate we all felt about the project.

Q. What was the most challenging part of making the film? 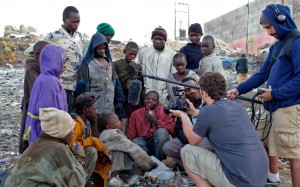 A. Seeing the children in completely hopeless situations, especially the street children. There were a few street kids we met, that I can only hope will find their way to school to eat. Many of them are destined to die on the streets from drug abuse, hunger or violence. It was very difficult to come back to New York and order dinner from an app on my smartphone. The meal would magically be cooked and delivered to my apartment. It felt like I was on another planet coming back, because my reality at home was so different from the reality of these kids in Malawi, Kenya or India. It just makes no sense. Emotionally, you can’t handle the dichotomy between the two situations. It can be very depressing at times to remember the images of those still suffering.

Q. What was the most enjoyable part? 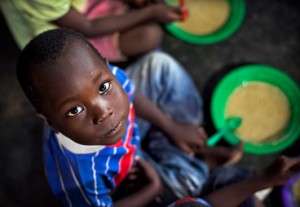 A. Most of the kids we met were laughing and smiling the entire time. They loved learning, and they really appreciated the simple meal. Mary’s Meals is now feeding over 800,000 children every day. It’s changing entire countries, more than 30% of school kids in Malawi are fed by Mary’s Meals. The growing and food production is employing farmers and factory workers, which helps stimulate the economy. They really are changing someone’s world. That is enjoyable to see.

Q. What permits and permissions did you need to get to make the film?

A. Some of the governments are very sensitive about the images of poverty in their country. So we tried to fly under the radar for the duration of the trip. We put together a very small crew and it worked out very well. 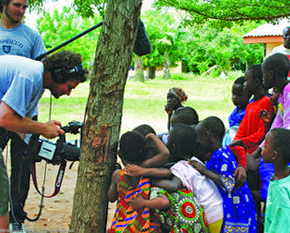 A. These types of projects can be so rewarding as a filmmaker. If you have a chance to work on a charitable project, do it. Volunteer your time, talent and skills. Nobody on our crew took a fee on this project. All the funding went directly into the production. The satisfaction you will get back from working on something that you know will be changing someone else’s world is priceless. It sounds cliche, but it is true! Everyone from our writers, Michael Campo, Cyndi Amaya and associate producers, Bethany Heinrich and Tiffany Pham donated their hard work and time to make this possible. Even our amazing friend and composer, Thomas Bergersen was so generous with giving us his beautiful music to the score of the film. 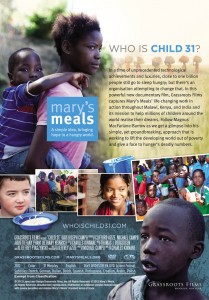 Q. How has the film impacted Mary’s Meals?

A. We can only hope the hundreds of thousands of people who have seen the film have been moved to get involved on some level. Hopefully soon, they will be feeding well over a million children every day. We hope the film played a small part in that. Magnus truly believes that someday, they could feed every starving child in the world. Sounds impossible, but after seeing the incredible idea working, we believe him.

Q. How can people help this cause?

Q. What’s your next project?

A. Our next project we are developing is a feature-length supernatural thriller. We plan to shoot in Iceland at the end of the summer. Stay tuned by checking our website.

(BACK TO HUMANITARIAN AWARDS)